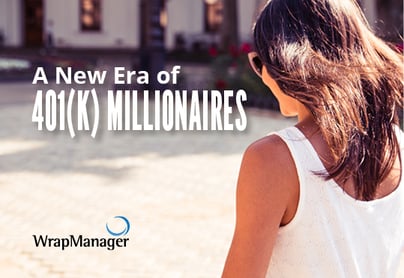 Fidelity Investments recently produced research that unveiled a surging population of 401(k) millionaires: women. According to Fidelity’s findings, the share of women who have accumulated $1 million or more in retirement plans has doubled over the last 12 years (based on data from 15 million retirement plan participants in Fidelity 401(k) accounts). As of the end of September 2017, about 20% of Fidelity’s 401(k) millionaires were women, which is up from less than 10% in the same period in 2005.

What does it take to grow a 401(k) to $1 million and above? Many things, but if we were to narrow it to just three, it would be: consistent saving, smart investing, and time. The women in Fidelity’s research have leveraged all three to become millionaires.

Consistent Saving: Women who earn less than $150,000 and have attained 401(k) millionaire status are saving 18.1% of their salaries, on average. To boot, the average employer contribution to match the employer’s savings is 6.8%, which brings the average savings rate to 24.9% of income. Ask yourself: are you socking away nearly 25% of income each year? Some investors may think they do not make enough income to save 25% a year, but consider that among the female 401(k) millionaires earning less than $150,000, women were earning $117,000 on average.

Smart Investing: Women who earned less than $150,000 and reached 401(k) millionaire status
were found to invest about 77% of their savings in stocks, which over time likely contributed significantly to the compound growth needed to cross the million-dollar mark. Having high allocations to stocks is not for everyone, but for long-term growth investors with lengthy time horizons, stocks can be useful in reaching your goal.

Time: One trait found among the 401(k) millionaires: they have been working and saving somewhere in the neighborhood of three decades. Fidelity found that women tend to cross the 401(k)-millionaire threshold after they hit 50, at an average age of 58.5. The study also said women may have an advantage because of their behavior of saving more for longer.

Could Your Retirement Plan Use a Boost?

In a country where 44% of the population does not even have $400 of emergency savings in place, reaching $1 million may seem impossible. But that does not have to be the case! The formula of consistent saving, smart investing, and time is not just for the people in Fidelity’s study. People who are working and saving can reach savings goals, but it starts with getting a plan into place.

WrapManager can help you build it. Talking to a WealthManager may reveal some opportunities in your 401(k) plan and financial life that can help you save more and invest better. Call WrapManager today at 1-800-541-7774 or send us a quick email to wealth@wrapmanager.com today to start a conversation with us.

Click here for more articles on saving for retirement.