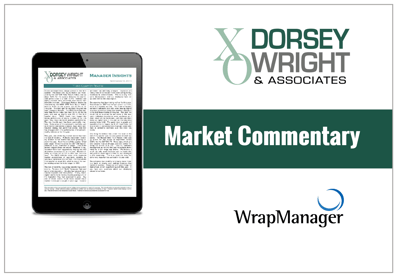 U.S. equities continued to rise during the second quarter. Both large cap stocks (S&P 500) and small cap stocks (Russell 2000) finished the quarter in positive territory. The same can’t be said for International stocks though. There have been quite a few head winds for international equities, and that caused both developed and emerging markets stocks to perform poorly this quarter.

Heading in to the start of the year, the U.S. Dollar was in an established downtrend and that was really helping push international equity prices higher. That changed in late April, and the U.S. Dollar spent May and June in a strong rally that really had a negative impact on foreign equities. Both developed markets (EAFE) and emerging markets finished down for the quarter. We are also seeing a big rotation our of Latin America, which is one of the areas that was such a strong performer last year. While this is unfolding you should expect the character of our international holdings to change and be reallocated in areas that are holding up better. A declining U.S. Dollar isn’t a prerequisite for international stocks to do well, but when there is a sharp reversal like we saw this quarter it takes everyone time to adapt to the changes.

The escalating trade war was another factor that hurt international stocks this quarter. We are also seeing the effects in domestic stocks. The talk of new tariffs really affects large, multi-national companies much more than smaller companies whose markets tend to be primarily domestic. The S&P 500, which is dominated by large multi-national companies is acting much differently than the small cap Russell 2000 right now. In May, the Russell 2000 broke out to new all time highs as did the Russell Micro Cap Index, which focuses on even smaller companies. The S&P 500 and the Dow Jones Industrial Average are nowhere near breaking to new highs at this point. This is an
important development to keep track of. Since small cap leadership is something we haven’t seen in quite a
while. We would anticipate the S&P and Dow to follow the small cap indexes and eventually break out to new highs. The S&P is currently still in a consolidation that is only five months old. It seems like it has been a long time, but the reality is that consolidations like this often last 6-9 months. Given the strength of the markets over the last year we don’t think this is anything out of the ordinary.

Despite the strength in the U.S. Dollar, Commodities (oil, specifically) continued to perform well. As measured by the S&P GSCI TR Index, commodities were up 8.0% this quarter. Generally we see strong commodity performance in weak dollar environments, but the strength in oil has bucked this trend so far. We are seeing increased allocations to Energy, and that trend looks like it can continue through the summer months and in to the end of the year.

The Federal Reserve also raised rates again during the second quarter making this the seventh raise since 2015. Even with rates going up, we are still at very low rate levels historically. We aren’t at levels where we believe higher rates will derail the stock market. Rates are rising because the economy is strong and has remained strong. That is positive for stocks, and we believe further rate increases this year will come with headline risk, but they won’t be enough to put a major dent in the economy.

Momentum continues to perform well this year. We are seeing a lot of changes in international markets, and we are in the process of re-aligning those accounts to the new leadership. Domestically, the leadership has remained fairly stable so far this year. There is a seasonally weak period ahead for stocks, but we think the odds favor stronger markets by the end of the year.