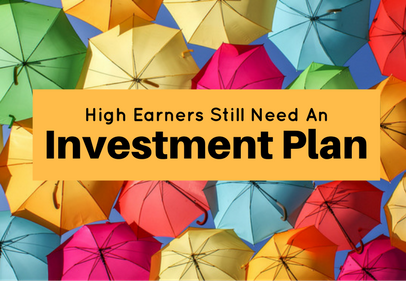 What does it take to be a top income earner in the United States? We found some data recently that breaks it down, telling us just how much you’d need to earn in order to give you a place at the top.

Here are some of the numbers by age. In other words, you’d need to earn this much each year to be a top 1% earner in the US:1

Having a high income may seem like it’s an automatic for also having financial security, but it isn’t. High earners still need an investment plan. Making a lot of money also often means having high living expenses, which makes management all the more important. Case in point: multi-millionaires who find themselves bankrupt far too early in retirement – and sometimes even before they retire.

We’re going to pick on professional athletes here, for two reasons: 1) they often qualify to be top 1% earners in their active years; and, 2) there are numerous instances where financial mismanagement led to bad outcomes.

Mike Tyson: Tyson is one of the most famous boxers of all time. He fought in over 100 professional matches and earned more than $400 million in his professional career. That should be more than enough money to live a comfortable life, right? Tyson declared bankruptcy in 2003, before he even had a chance to retire.

Sheryl Swoopes: Swoopes was a famed WNBA player who won the Olympic gold medal three times. Her salary did not put her in the top 1% of earners – the maximum league salary was $107,000. But she did earn over $50 million by teaming with Nike to create the Nike Air Swoopes, a popular sneaker. Even earning $50 million could not keep Swoopes out of Chapter 13 bankruptcy, though. A series of bad investments and deceitful lawyers meant that at 37 years old she was not even able to afford rent.

Darren McCarty – for any hockey fans out there, McCarty was a legend in his own right – a four-time Stanley Cup winner who raked in more than $15 million during his 15-season career. Managing that amount of money for growth and taking prudent income streams from it could have led to its lasting forever. But McCarty made some poor life decisions and filed for bankruptcy in 2006, before his NHL career had even come to an end. Later, he was also accused by the IRS of failing to pay his taxes.

Terrell Owens – and finally, Terrell Owens. Owens was a standout wide receiver in the NFL for 15 seasons, where he had a lot of success. He earned an estimated $80 million during his tenure. Nonetheless, he had to file for bankruptcy in 2012 because of bad investments, the housing market’s collapse, and $50,000 a month in child support payments.2

The morale of these stories is that even high earners need to create investment plans and manage their finances carefully. These athletes arguably made some pretty poor decisions, but even people with the right intentions can make mistakes and mismanage their assets. Our goal at WrapManager is to help our clients obtain financial security as they pursue their goals. We create investment plans that are designed to track performance over time and offer checkpoints to make sure you stay on track. Do you have an investment plan?

If not, call us today and work with us to make one. Our Wealth Managers will take about your finances and your goals, and put together a comprehensive plan that serves as a roadmap to help you get there. You can reach us at 800-541-7774 or start the conversation over email at wealth@wrapmanager.com.