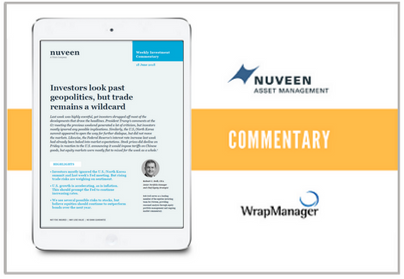 While Last Week Was Very Eventful, Investors Shrugged Off Most of the Developments That Drove Headlines

President Trump’s comments at the G7 meeting the previous weekend generated a lot of criticism, but investors mostly ignored any possible implications. Similarly, the U.S./North Korea summit appeared to open the way for further dialogue, but did not move the markets. Likewise, the Federal Reserve’s interest rate increase last week had already been baked into market expectations. Stock prices did decline on Friday in reaction to the U.S. announcing it would impose tariffs on Chinese goods, but equity markets were mostly flat to mixed for the week as a whole.

Which risks could derail the stock market?

It appears to us that the overall macroeconomic and earnings growth backdrop remain solid for stocks. Nevertheless, investors should consider a number of potential downside risks. Let’s start with the economic and inflation environment: U.S. growth appears to have shifted to a higher gear while labor is in short supply and wages are rising. Tax cuts and fiscal stimulus are also accelerating growth. After remaining stubbornly low for years, inflation is finally starting to creep higher.

This presents an environment for continued Fed rate increases, which could eventually act as a drag on equity prices. In our view, rates remain relatively low and are still below a neutral level. As such, we think equity markets can withstand additional rate increases (especially if they remain slow and well telegraphed). Rising rates, however, are likely to put significantly more downward pressure on bond prices.

From a political perspective, we think the most pressing risk remains possible further deterioration in trade. We think the prospects for an all-out, 1930s-style trade war remain low, but the G7 meeting and the recent announcement of new U.S. tariffs on Chinese goods are not encouraging. We are holding out hope that heightened tensions are more about negotiating ploys and that trade issues can deescalate, but this remains a risk worth watching.

Assuming that a full-blown trade war does not materialize, rising bond yields may be the most probable catalyst for upsetting equity markets. This has not happened so far, since yields have had trouble sustaining advances. But higher yields seems like an inevitability, given stronger economic growth, rising inflation and tightening Fed policy.
Overall, we think equities still look attractive and believe the bull market can and should continue. We also expect stocks to continue outperforming bonds over the next six to twelve months. But unlike in recent years, this relative out performance may be due more to bonds experiencing negative returns.

To see the top 7 weekly themes that Nuveen sees as important for investors, download the complete money manager commentary here.