Stronger or Weaker Dollar – Which is Better?

The dollar debate between investors, economists, and politicians has been rolling on for years. Is a stronger dollar or a weaker dollar better for the US economy and the stock market? Doing research on this question will turn up views from every corner of opinion with no definitive answer. The reality: the dollar debate is complicated, and it depends on who you ask.

Opinions within the current administration even appear to be somewhat split on the issue. Treasury Secretary Steve Mnuchin said in January that dollar weakness was “not a concern,” and President Trump has hinted in the past that he prefers a weak dollar. These views appear to differ from Larry Kudlow’s, who now heads the National Economic Council. Kudlow stated recently on CNBC’s “Closing Bell” that “a great country needs a strong currency” and that he favored a strong and steady dollar.

It Depends on Who You Ask

At the end of the day, the status of the dollar really depends on where and how it’s being used. Let’s say you’re a multinational corporation that makes a majority of revenue in foreign markets. In that case, you’re almost certain to favor a weaker dollar, since that means your goods/services are more affordable. A stronger dollar for that corporation means more expensive goods for foreign customers, which could adversely impact sales.

The opposite may hold true for a small-cap, largely domestic based company. In that case, a strong dollar would be more beneficial, as it gives the US consumer more purchasing power and allows the small corporation to produce their goods less expensively, particularly if dollars are being used to buy foreign inputs for production.

The same could be said if you’re a retiree who loves to travel abroad. In that case, a strong dollar is likely preferred, as the cost of travel, lodging, and entertainment is more affordable when the dollar is strong versus weak.

The list goes on as you look at various economic situations on a case by case basis. For the purpose of this article and for investors, however, the better question might be: how does the dollar affect stock prices – and by extension, how does the strength of the U.S. dollar impact your investment portfolio?

When It Comes to the Dollar, Do Stocks Really Care?

The chart below looks at the foreign exchange value of the U.S. dollar against the currencies of a broad group of major U.S. trading partners, like the Euro Area, Canada, Japan, Mexico, China, United Kingdom, Brazil, and so on. As the line of the chart declines, the dollar is strengthening, and vice versa: 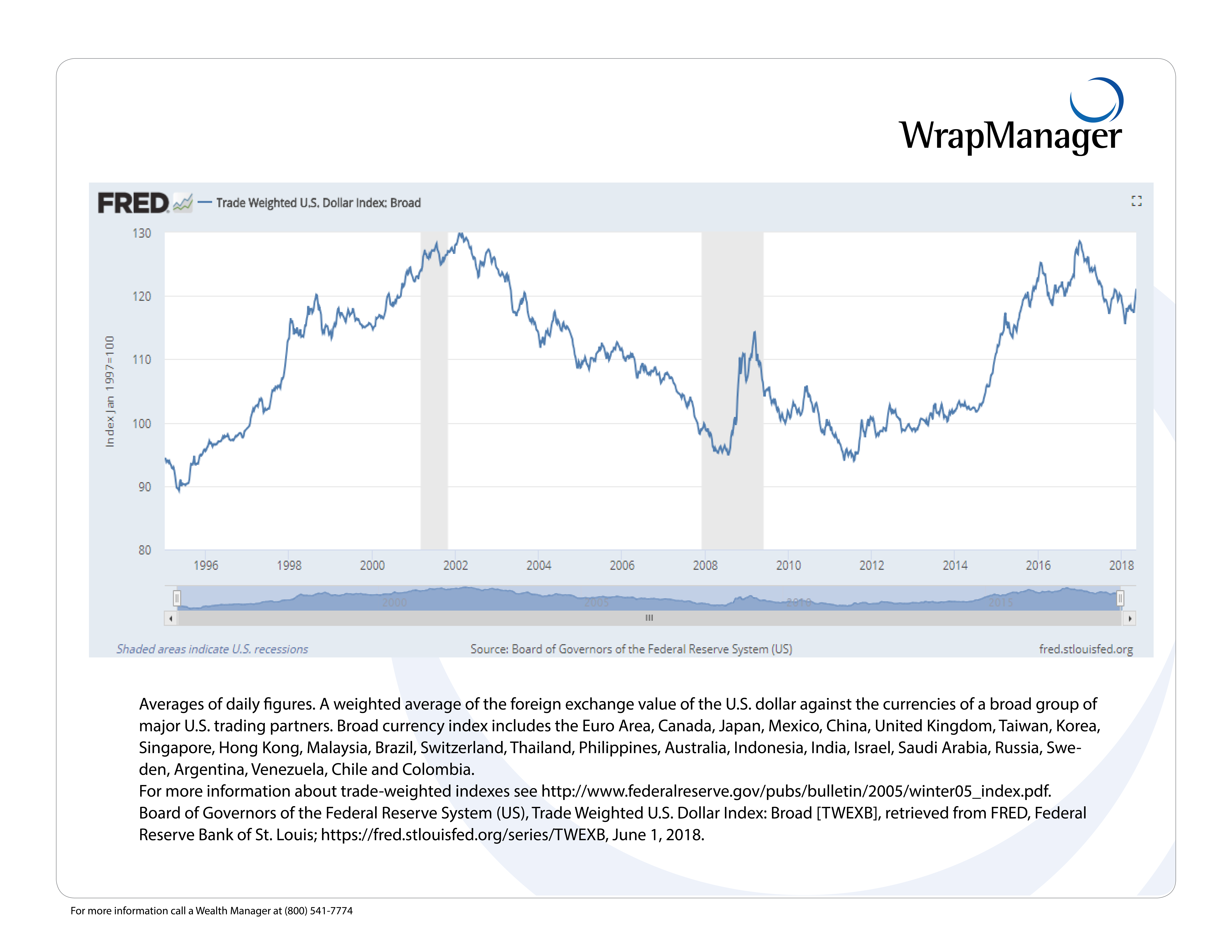 As you can see from the two charts above, when the dollar was weakening in the late 1990’s, stocks had some of their best years. On the flip side, the dollar strengthened from 2003 to around 2008 – a bull market period. The same applies to the current weakening pattern, with stocks having performed well for the last several years.

The key takeaway: stocks are influenced by much more than just the relative strength or weakness of the dollar.

If you’re concerned about how the strength of the dollar could be impact your international investments or your retirement plans, the Wealth Managers at WrapManager can help you. Drop us a line today to find out more.