US Economy: The Current State of Affairs 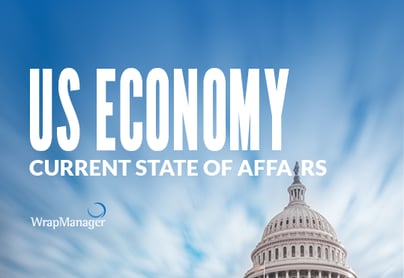 When it comes to the current state of the US economy, it is difficult to find many problems. In fact, the data and trends appear to support the case for continued growth in the coming year – both for the economy and for corporations. Below, we dig into the data.

Let’s start with the classic growth measure, GDP growth. According to the Bureau of Economic Analysis, a “second estimate” of US Real GDP growth in Q4 2017 showed an annual growth rate of 2.5%, which marked a slight but not significant drop from Q3 2017’s 3.2%.

As you can see from the table below, US GDP has been growing at a fairly steady clip for three years running,1 and many economists – including the new Federal Reserve Chair Jerome Powell – see more growth in 2018. As it stands today, this economic expansion is the third longest in history at 108 months and running.2

Indeed, in Powell’s first public comments since taking over as the head of the Federal Reserve, he struck a tone of confidence, indicating that his expectations for domestic economic growth have increased since the beginning of the year. He cited the passage of the $1.5 trillion tax cut, along with stronger global growth overall, as reasons for his optimism.

In Mr. Powell’s own words, “my personal outlook for the economy has strengthened since December,” adding that, “I would expect the next two years on the current path to be good years for the economy.” Under his leadership, the Federal Reserve is expected to continue its gradual path of interest rate increases.2

One of the main drivers behind growth is corporate spending and investment. Lawmakers and the president had made it known that there are incentives in the new tax bill designed to increase capital spending, in hopes of also increasing productivity. According to the Economic Report of the President (February 2018), over 350 companies have announced billions in new investments in plant and equipment in the United States, along with improvements to workers’ compensation or benefits, with some raising the minimum wage for their employees, increasing 401(k) contributions, and giving bonuses. These improvements are expected to affect more than 4.1 million employees.3

And We Haven’t Even Mentioned Strong Earnings Growth

In short, corporate America is looking healthy and strong.

The Economic Outlook is Optimistic: Is Your Portfolio Positioned to Participate?

The economic outlook appears positive at the moment, but investors must also remember that this has been one of the longest economic expansions in history – and there are risks that come with age. For one, stocks are not necessarily cheap by historical standards. The forward 12-month P/E ratio for the S&P 500 is 16.7, which is above the 5-year average of 16.0 and materially higher than the 10-year average of 14.3.4 There are also extraneous risks like geopolitical conflicts, trade wars, and the potential for monetary policy missteps.

Investors have to take all of these factors into account when building a portfolio, and you must also be cognizant of your investment objectives and risk tolerance. WrapManager can help you take this holistic approach to portfolio building and management, and we can help you position your portfolio accordingly.

Get in touch with us today to get started by calling 1-800-541-7774 or by sending an email to wealth@wrapmanager.com.