What Falling Oil Prices Mean for Your Portfolio Strategy

Oil prices have moved around quite a bit over the last decade, but the pace and magnitude of the recent decline has investors wondering if there’s trouble ahead for the markets.

Oil Prices Have Fluctuated Greatly in the Last Ten Years 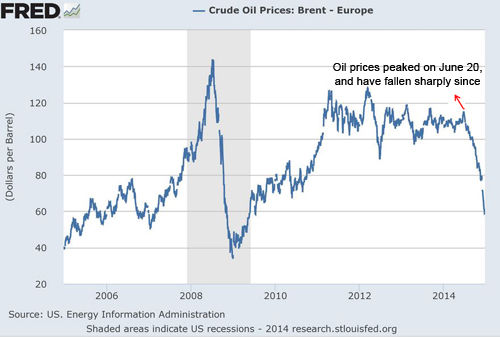 With the price of a barrel of oil down over 40% in the last six months,1 many analysts are scrambling to figure out what’s causing the slide and whether it may continue. But many pundits are ignoring the more essential question: what do falling oil prices mean for your investment portfolio?

The question should be examined from three angles:

1) Is it supply or demand that’s having a greater influence on falling prices, and what’s the outlook from here?

2) Which sectors, countries and areas of the market benefit from lower oil prices and which are hurt?

3) What happened to stocks the last time oil prices dropped like this?

We’ll take a look at each of these below.

A recent report by PIMCO argues that falling oil prices are not “harbingers of real economic stress and downside macroeconomic risk.”

Instead prices are being driven down by too much supply—according to the same report, 70% of the drop in oil is being driven by upside surprises in supply growth.2 Crude oil production from US wells is poised to approach a 42-year record next year,1 and OPEC announced on November 27th that they were declining to cut production as a result of falling prices.

In fact, the Saudi Arabian oil minister said they are prepared to increase output and gain market share by meeting the demands of any new customers. He added that the world may not see oil prices return to $100 per barrel levels.3

Does the Stock Market Benefit from Lower Oil Prices?

Analysts at Roosevelt Investments believe that the US, specifically consumers, are a net beneficiary of a lower oil price.

According to their research, a 20% decline in gasoline prices equates to approximately $522 in annual savings to the average household, which consumers could use to make other discretionary purchases. With over 125 million households, this could equate to $66 billion of “extra” spending in the economy. Roosevelt thinks that industries within the consumer sector could stand to benefit the most, including restaurants, apparel, snack food, and confectionary.

Which Markets Could be Hurt by Lower Oil Prices?

Among those who might be adversely impacted by lower oil prices are oil-producing countries and certain energy companies. Major exporters like Russia, Venezuela, Nigeria, and Iran have felt the sting of lower prices as their economies rely heavily on oil sales.5 For those countries that are oil exporters and are also categorically “Emerging Markets,” it could spell difficult times ahead.

Energy stocks could also continue to feel a pinch from lower prices. More specifically, the International Energy Agency cited that companies with high production costs could respond to lower prices by cutting production, which could impede growth. These are companies who extract oil from deep water or oil sands, for instance.6

What Happened to Stock Prices the Last Time Oil Fell?

The example from history that looks most like the situation today happened back in 1986. Then, Saudi Arabia engaged in a ‘price war’ with US producers, in an effort to crowd them out and reclaim dominant market share. They opened up the oil spigot and sparked a four-month, 67% decline in the price of oil—prices slid from a November 1985 peak of $31.72 to a March 1986 low of $10.42.

How does Falling Oil Impact Your Portfolio Strategy?

If the US does indeed hit record oil production next year, and OPEC holds firm on their production quotas, oil prices could remain at lower levels for 2015. Consider the following potential portfolio implications to discuss with your financial advisor: US equity exposure relative to international, investments in oil-exporting countries or those sensitive to oil prices, and some possible sectors that could do well relative to others.

See how your portfolio strategy sizes up to these energy themes by having your financial advisor run a fresh analysis of your holdings. Be sure to look at how your portfolio has performed in the face of falling oil prices over the last six months. It could be time to make some adjustments.

If you’ve never had your portfolio closely analyzed before or would like a fresh set of eyes on your investments, one of our Wealth Managers is ready to help. You can call us at 1-800-541-7774 or start the conversation over email at wealth@wrapmanager.com.