How “Familiarity Bias” May Impact Your Investment Decision-Making 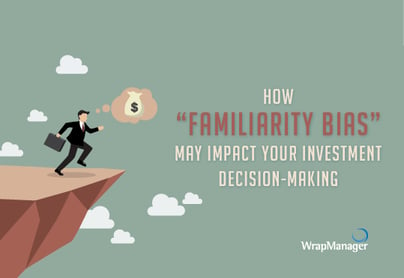 It’s no secret that investors have a tendency to "get in their own way” when it comes to making investment decisions. As we have written before, you may not be your own best financial planner. The idea that investors often make emotional or ill-informed decisions is not an attribute that is just widely-known and accepted—there is actually an entire field of research devoted to it.

This field of research is known as Behavioral Economics or Behavioral Finance, and people in the field study “inherent biases that plague individual investors.” These biases are often ones that are difficult for individual investors to come to terms with and overcome. Robert Stammers, the Director of Education for the CFA (Chartered Financial Analyst) Institute, frames the role of investor behavior on decision-making into three behavioral biases: overconfidence, familiarity, and anchoring.1 We will focus on the familiarity bias here.

What is Familiarity Bias?

Do you know someone who will only shop at a certain place or buy a certain brand, or who will only take a certain route to go somewhere because that’s the route they’ve taken for years? These are examples of familiarity bias, which in many cases can prevent a person from acting objectively—even when the information available suggests they do otherwise.2

Familiarity bias is all too common in investing. The most commonly cited versions are when an investor will only buy stocks/bonds in their home country; when an investor owns a high percentage of company stock simply because they work there; or, when an investor buys shares of a company whose product they frequently use and enjoy (think: Facebook, Snapchat, Johnson & Johnson).¹ Let’s take a look at all three.

The Investment Perils of Familiarity Bias

Benjamin Graham, one of the most famed investors of all time and author of “The Intelligent Investor” once said, “the investor’s chief problem – even his worst enemy – is likely to be himself.” 2 This is not to say that individual investors are incapable of effective money management—it is more to remind investors that we often tend to get into our own way. Seeking help with investments isn’t itself a sign of weakness—it’s recognizing the simple fact that we have weaknesses.

Creating checks and balances in your investing approach is a good way to get past this behavioral issue, in our opinion. If you have a sounding board (a financial advisor) to discuss investment decisions with, you may be more likely to think more deeply about investment decisions before moving forward with them.

The Wealth Managers at WrapManager are here to be your sounding board, to talk with you about your investment plan and your investment portfolio, and to offer you a path to diversification that we believe delivers desirable long-term results.

1. Forbes- Three Behavioral Biases That Can Affect Your Investment Performance

2. Nerd Wallet - Understand Your Familiarity Bias to Be a Better Investor