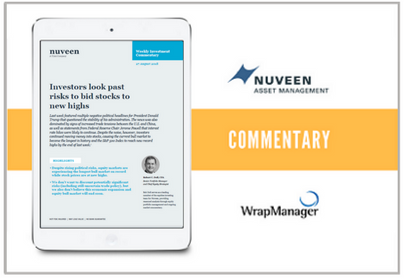 We see threats to equities, but we don't believe this bull market is over.

Last week featured multiple negative political headlines for President Donald Trump that questioned the stability of his administration. The news was also dominated by signs of increased trade tensions between the U.S. and China, as well as statements from Federal Reserve Chair Jerome Powell that interest rate hikes were likely to continue. Despite the noise, however, investors continued moving money into stocks, causing the current bull market to become the longest in history and the S&P 500 Index to reach new record highs by the end of last week.

It is natural to ask what risks will likely cause the bull market to end, as equity prices again reach new highs and the roller coaster action that has dominated markets since February appears to be over (at least for now). Rising protectionism appears to be the biggest theat. From a rational perspective, we think this risk should fade since trade restrictions are ultimately a lose-lose proposition. And the United States appears more willing to negotiate than President Trump’s tough rhetoric would indicate. Trade uncertainty remains a wildcard, but we still believe that an all-out trade war is unlikely.

Rising bond yields are also an oft-cited risk for equities. This threat has been slow moving so far in this cycle. Over the past decade, yields have moved abruptly higher, followed by long periods of consolidation. The Fed and other central banks remain committed to slowly increasing interest rates and the global economy appears to be in an uneven acceleration mode. This should be a recipe for higher yields over time, but we think the pace of the advance should remain contained, meaning the equity bull market should be able to cope.

Since the equity bull market began in March 2009, it has been the most distrusted in memory. We have seen several significant corrections, including in 2010/2011, 2015/2016 and earlier this year. But the length and breadth of the advance has been impressive. We are now experiencing the longest bull market on record, and it hasn’t been dominated by a single sector or market area.

The latest advance in prices appears due to solid fundamentals (strong earnings and solid economic growth) as well as the easing of some risks, such as fears of contagion from the Turkish lira collapse. Today, skeptics point to such factors as the flattening yield curve, high corporate leverage or the Fed’s shrinking balance sheet as reasons to believe this economic expansion and bull market are drawing to a close. But we are more constructive and believe the longest running bull market in history still has legs.

"We remain constructive and believe the longest running bull market in history still has legs."